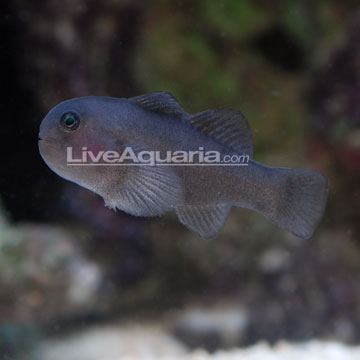 The Black Clown Goby is common within the reefs of the Indo Pacific, found usually among soft and hard coral colonies. They are a small stocky shaped fish with a very large head for their size. There are many different color variations, and this species is black in color. They are a peaceful fish that makes a wonderful addition to a reef aquarium containing colonies of polyp corals, as they enjoy swimming and hiding amongst the polyps. However, they may nip at the polyps of SPS corals.

The Black Clown Goby requires a 10-gallon or larger aquarium. They will rarely become aggressive towards other fish, but will fight among their own kind in smaller aquariums. If the aquarium is large enough, a group may be simultaneously introduced. If branching coral is present, the group will form mated pairs. It is best if Clown Gobies are kept with other docile species.

Write a Testimonial | Ask Customer Service
Christine B Burlington , WV
A fun little guy. Ours is true black. Sometimes hangs out with our Yellow Clown Goby but often just sits on the tank wall. Not a great swimmer but he often likes to get in the jet stream and get blown backwards.
Chris G Scarsdale , NY
funny little fish. He loves to hide in my sea grass. He likes to start on live foods (copepods,live brine shrimp etc.) then eat regular aquarium foods suck as enriched mysis shrimp and frozen brine.
1-2 of 2 testimonials