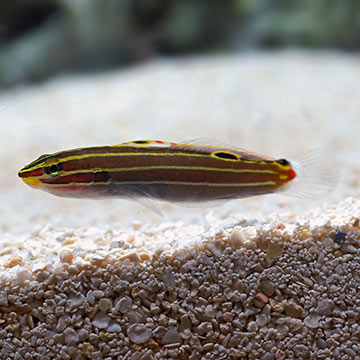 Hector's Goby, also known as Hector's Hover Goby, has a bluish-black body with bright yellow horizontal stripes and an eyespot on the dorsal fin.

A 10 gallon or larger aquarium with plenty of hiding places is suitable for this fish. It can be included in a reef aquarium and the fish will sift the sand as well as graze on hair algae. It is non-aggressive towards other fish and will not bother invertebrates in the tank.

Hector's Goby is easy to feed and its diet consists of most marine foods. It consumes large amounts of algae, worms, and prepared foods such as vitamin enriched mysis shrimp and brine shrimp.

Write a Testimonial | Ask Customer Service
Alan M San Francisco , CA
I love this little Goby. I wanted a Hector's because of the description of feeding on some of the algae and worms but it's much more than that now that I own one. He's fun to watch as he shifts the sand around and tunnel under rocks. He'll nibble on algae, and take in rock and sift it through its gills and relandscape the bottom. He stays out in front and plays well with others...
Christine B Burlington , WV
A fun addition to the tank. Ours stays mostly out front nibbling here and there among the rocks and sand. Perfectly reef safe and gets along with all our other fish. Colors are cool to see up close with unique spots and stripes.
1-2 of 2 testimonials