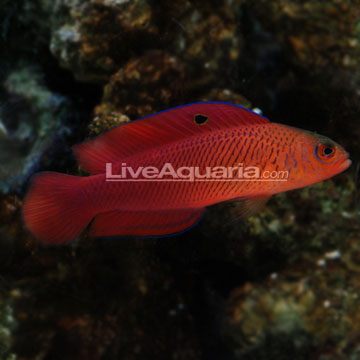 The Mccullochi Dottyback is also known as the Oblique Lined Dottyback, and originates from the reefs of the Coral Sea. The males have an elongated, bright red body with purple accents on both the fins and edging its scales. The females also have an elongated body, but their coloration ranges from purple within the head area, to red and yellow towards the tail. These are one of the most striking, and unfortunately rare Pseudochromis available in the industry. They make a great addition to the saltwater fish only or reef aquarium.

The Mccullochi Dottyback does well in a saltwater aquarium of at least 30-gallons with plenty of live rock for hiding places and for supplemental nutrition. It will tend to swim in the open after it has become acclimated to its new environment. Only house one pair of this species per aquarium, unless the aquarium is very large, and they are acclimated at the same time. They will not bother invertebrates, and are a great fish for the reef aquarium. They may also help control bristleworm populations in the aquarium.

The diet consists of meaty foods including; vitamin enriched brine and mysis shrimp, chopped fish and a quality flake food.