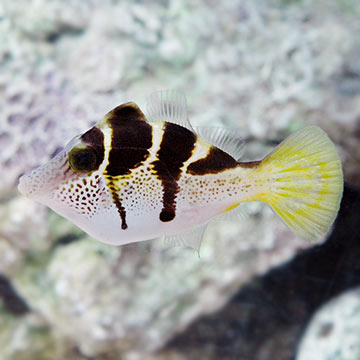 The Mimic Saddle Puffer is a filefish that has developed its body shape and coloration to mock the appearance of the Valentini Puffer. By copying these puffers, they appear to would be predators that they are an unpalatable meal. They are an interesting looking fish with dark brown bands across the midsection, brownish-orange spotting on the lower half, yellow fins, and blue striping running along the back. It lacks pelvic fins, but has learned to use the pectoral fins to move about the aquarium. You can tell the difference between these filefish and the puffer in that they mimic by the dorsal spine. The filefish has two dorsal spines, whereas, the puffer has only one.

It is rarely aggressive toward other fish except those of its own genus, and is best suited for a 30 gallon or larger aquarium that does not have invertebrates.