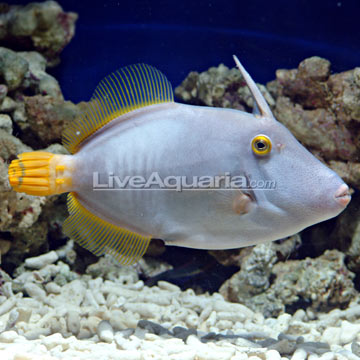 The Clown Filefish, also known as the Vagabond Filefish or Whitespotted Filefish, originates from the reefs of South America. A rare find in the industry, they are pale blue to purple in color and the entire body is adorned with white spots. These fish are a great addition for the saltwater fish only aquarium.

The Clown Filefish is rarely aggressive toward other fish except those of its own genus, and is best suited for a 100-gallon or larger aquarium with plenty of live rock and no invertebrates. These filefish eat branching SPS corals, algae, sponges, sea urchins and mollusks in the wild. They are not suitable for a reef aquarium, but make a great addition to a fish only aquarium.