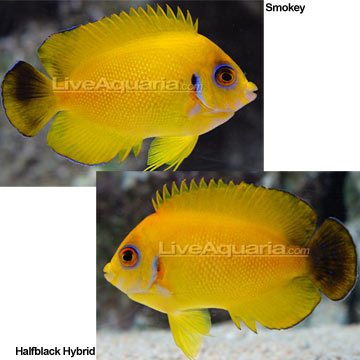 The Lemonpeel Hybrid Angelfishs require a 70-gallon or larger aquarium with hiding places and large amounts of live rock to graze on the microalgae growth. It is very prone to nip at small-polyped stony corals and clam mantles. It is best not to keep these Angelfish with fish of the same genera.

The diet of the Lemonpeel Hybrid Angelfishs should include Spirulina, marine algae, high-quality angelfish preparations, mysis or frozen shrimp, and other meaty items. This angelfish requires more algae and seaweed in its diet than most angels.

Write a Testimonial | Ask Customer Service
Connor S Asheville , NC
such a cool fish. I love it! Never bothers any other fish. But my yellow tang gets mad when he comes near him awsome
1-1 of 1 testimonials