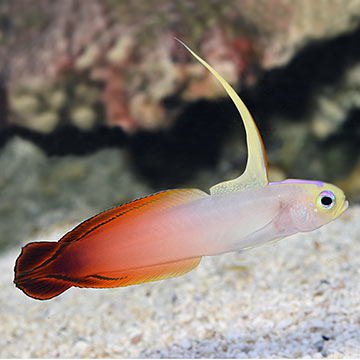 The Firefish is one of the more popular fish in the marine hobby. It is a magnificent fish with brilliant coloration, a unique body shape, and unparalleled personality. Also known as the Firefish Goby, Fire Goby, and Magnificent or Fire Dartfish, Nemateleotris magnifica has a yellow head, white anterior, and pinkish to orange-red posterior. The dorsal, anal, and caudal fins are highlighted in black. In addition to its striking coloration, the Firefish Goby is also heralded as a sweet-tempered fish with lots of personality. And, because of its small size, the Firefish Goby makes a great addition to the smaller reef system.

In the wild, the Firefish Goby is usually found in groups hovering over the reef, harvesting planktonic food that drifts by in the current. The docile, Firefish Goby is timid and in the wild, each will have a "bolt-hole" into which it quickly ducks when threatened. In the home aquarium, the Firefish Goby needs multiple safety zones amongst rocky crags or outcroppings into which it can dart if stressed. This member of the Gobiidae family is generally not aggressive towards other fish except those of its own species. However, a mated pair can live peacefully together.

To best recreate their wild habitat, the Firefish Goby requires a 20-gallon or larger system with moderate lighting conditions and a moderate current passing over the live rock "reef." Keep in mind that a stressed Firefish Goby will try to jump out of your aquarium. As such, house the Firefish Goby in aquarium systems with a lid.

Along with algae and zooplankton growing in the aquarium, the diet of the Firefish Goby should consist of vitamin-enriched brine fish (live or frozen), mysis shrimp, and prepared marine foods.

Write a Testimonial | Ask Customer Service
Dave P Tukwila , WA
Probably the best deal for wild coloration, price, and a unique body shape in any saltwater. It is probably also the most docile saltwater fish too. They swim medium to high up in the tank, but need their hiding space when startled. They are jumpers so don't have a large opening on your tank lid.
Ryan L Columbus , OH
I bought a Firefish Goby in February and since then he has done very well. He is fed spirulina daily and brine shrimp three times a week. He has added a lot of character to the tank and is always out looking around acting as a lookout. It would be a good addition to any tank.
Jake K Charlotte , NC
These are incredibly intelligent fish. My best friend's wife thinks 'FiFi' the firefish is wierd and ugly, but they add great character, beauty, and life to the tank. Mysid are his favorite, but he will occasionally eat Formula Two and also loves Spirulina enhanced brine. Be warned: they WILL jump. FiFi has been fine for weeks but was antagonised by two Yellowtail Blue Damsels (now traded to a friend) and made a miraculous recovery after a search and rescue mission we went on to find him under the stand all covered in fuzz. Get one, you won't regret it!
Aarib B Seagrove , NC
These flame-colored fish are as beautiful as they are docile. They keep a hiding place in the aquarium, but actually spend most of their time swimming in open view. So long as there are no predators to eat them, these small fish can he kept in any aquarium that is ten gallons or larger. The firefish is aesthetically pleasing, easy to keep, and can be obtained for a very reasonable price.
Kenn F Ann Arbor , MI
I ALWAYS keep one or more of these in my tanks. While I recognize they jump, I have a covered tank so I never had that problem. They do swim fast, hence the other common name Dartfish. Like all gobies, they do like hiding places. I have always loved the fact that they are constantly active too. While they don't tend to swim about, they hover and move their dorsal and ventral fins in quick snapping movements. They will get your attention. I can't see how ANYONE could consider these things unattractive. The subtle blending of colors is artistic. These are good fish for beginners for many reasons; the price, their ease of care, and for their dorsal fin. When fish are stressed, they often keep their fins close to their body. Because this fish has such a large and obvious dorsal fin, it is easy to tell when it is stressed.
Alan M San Francisco , CA
I have a 14gal nano reef with a pair of clown fish and wanted to add some color and variety to my tank. I purchased a pair of Firefish here. The are beautiful, calming and if you don't startle them they'll swim about the front of the tank curiously watching you as you watch them. They are good at hiding and are a little skiddish. I've read/heard they are jumpers but so far have not had an issue (yet).
Cole A Toluca
this fish is a survivor! We had two in our 30 gallon nano reef tank, and had a massive ich outbread that killed everything except these two fish.
Harvey W Kearnysville , WV
he is doing well in my 20 gallon, feeding takes forever unless its just my paitients.
C R Cincinnati , OH
I bought four of these cute little guys from Drs Foster & Smith. They all arrived alive and are doing well. I will certainly buy more marine fish from Live Aquaria....can't go wrong.
Alden L Oregon City , OR
Firefish are great fish overall, but need EXTREMELY peaceful tank-mates to thrive. They are best kept as a pair, in a nano reef tank. Amazing colors!!!
Chris C West Nottingham , NH
I ordered three of these from liveaquaria and they came active, alive and healthy. I have three that school around the aquarium most of the time. Very nice inexpensive fish.
Ester Herbert Harvey , LA
I have 2 Firefish (one has an orangey tail, the other red/purplish). The former is very skittish and will high tail into his hiding place in the live rock at the slightest movement. The latter is more brave, always out looking curiously around. Beautiful colors. Will not disappoint.
Kim P Pittsburgh , PA
He was always hiding and went to the bottom of the tank order, but he was fun to have in a tank. Unfortunately, ours died because he was too scared of the other fish to come out and eat.
1-13 of 13 testimonials