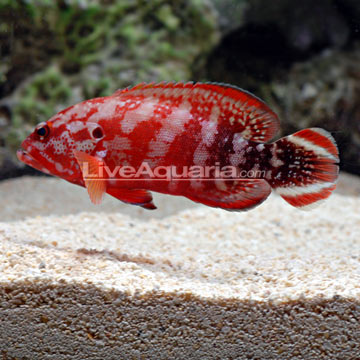 The Red Flag Grouper is known by many names including the Flagtail Grouper, Darkfin Hind, Banded-tail Coral-cod, and the V-tail Grouper. It has a red body, sometimes mottled with white. The two white stripes on the caudal fin (tail) appear to form a "V."

A 180 gallon or larger aquarium is required due to its size and feeding habits. It is an extremely aggressive fish and may eat its tank mates as well as crustaceans.

The Red Flag Grouper prefers a diet of meaty foods such as krill, shrimp, and other small fish.