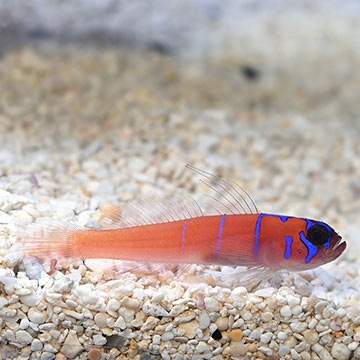 The Catalina Goby is considered one of the most beautiful gobies. It has a bright red body with a vivid blue mask and vertical stripes on the front half of its body, and the tail has a yellow tint. This species is very peaceful and will not harm other fish, corals, or invertebrates. The Catalina Goby can be housed in Nano aquariums at least 10 gallons in size. The Catalina Goby may demonstrate aggression towards others of its own species if crowded, but groups may be housed together in large aquariums. The Catalina Goby is not typically shy and can often be seen perching on the live rock within its territory.

One of the most interesting aspects of the Catalina Goby is its reproductive behavior. Though each Catalina Goby has the reproductive tissues of both genders, an individual can only display one behavioral gender at any given time. If a Catalina Goby finds itself unsuccessful as one gender, it can switch to the other. Behavioral males are normally larger and have a longer dorsal fin with black tips on the longest dorsal fin rays. When ready to breed, a behavioral male chooses a cave in which to care for his brood. He lures the female inside, where she will attach her eggs to the walls of the cave. He will care for the eggs there until they hatch.

The Catalina Goby is hardy and easy to feed in captivity. It will accept almost any small, meaty prepared or frozen food. The diet can include frozen mysis shrimp, CYCLOP-EEZE®, and vitamin-enriched brine shrimp. Once accustomed to the aquarium, the Catalina Goby will also accept sinking pellets or flake foods.

Write a Testimonial | Ask Customer Service
Lena M. Wausau , WI
My catalina Goby is diurnal. Rarely out at night. They'll pick a favorite spot and go there for safety if threatened. Loves frozen brine shrimp and even flaked food.
Richard Lilly Corpus Christi , TX
Very striking color, and yes they are very fast. They dwell at the bottom of the aquarium and go in and out of rockwork, and are often chasing each other.
S. Otteni Clinton , UT
This is by far my favorite fish. I ordered two and they have the greatest color and are very active. I have a few fish that like to try and pick on them, but they are too fast. With this said, I have to say that they could careless about the threat of being chased, they love to explore the tank and the other tank mates from time to time. I am thinking about ordering a few more, and I would recommend getting at least three because they are so colorful and active.
1-3 of 3 testimonials