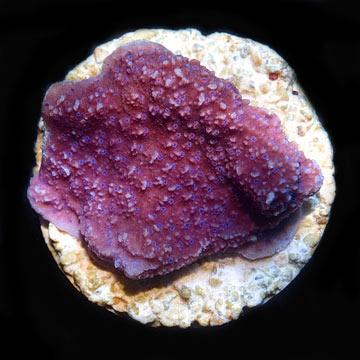 The Purple Montipora capricornis Coral is a small polyp stony (SPS) coral often referred to as Vase Coral. Montipora Corals come in a vast variety of forms and colors, but this variety is a nice deep vivid purple. Capricornis corals grow in a circular, leaf-like shape, and are sometimes refered to as a vase coral. They are very beautiful and fragile corals, and care needs to be taken on its placement in order to protect it from damage.

This Aquacultured Montipora capricornis Coral is peaceful and can be placed in close proximity to other similar peaceful corals in the reef aquarium. Aquacultured Montiporas are one of the easier to maintain SPS corals and grow rapidly in the established reef aquarium. It will require medium lighting combined with a medium water movement within the aquarium. For continued good health, it will also require the addition of calcium, strontium, and other trace elements to the water.

Aquacultured Montipora capricornis Corals are mounted on a piece of live rock that can be placed easily and securely in or between rockwork in the reef aquarium.