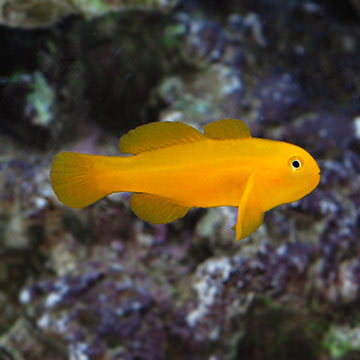 Native to the reefs of the Indo-Pacific, Gobiodon okinawae usually congregates among soft and hard coral colonies. Since the Yellow Clown Goby is peaceful, it makes a wonderful addition to any reef aquarium containing colonies of polyp corals. Here, this member of the Gobiidae family will swim and perch amongst the polyps. Care needs to be taken, however, with SPS corals since the Yellow Clown Goby may nip at the smaller polyps.

For the best care, house single specimens in a 10 gallon or larger aquarium, preferably with branching coral to best recreate the natural habitat of the Yellow Clown Goby. It will rarely demonstrate aggression towards other fish, but will fight with its own kind especially in smaller aquarium systems. Therefore, it is best to keep the Yellow Clown Goby with other docile species.

It is common for the Yellow Clown Goby to spawn in an aquarium. Caution should be exercised if the aquarium contains Acropora sp. or similar SPS corals. The female Yellow Clown Goby will lay her eggs on the underside of the coral's branch, which will cause tissue recession in that area of the coral. However, under good conditions, the coral will regenerate the lost tissue.

Write a Testimonial | Ask Customer Service
Candy V. Washburn , WI
These gobies add brilliant flashes of color to the larger reef aquarium. They like to stay out in the open, so you don't have to search for them, and they eat well. Larger fish seem to ignore them.
Todd V Hillsboro , OR
My yellow clown shares my 75 gallon reef tank with a dwarf flame, bristle tooth tang, lyretail anthias, and a yellow candy hog fish. Despite his small size, nobody picks on him and he's a lot of fun to have in the tank. He loves to hang out in the flower pot coral and in the stalks of my xenia. I feed him mysis and brine.
Andy S Seattle , WA
With it's super bright yellow color and minature size, the clown goby is a great addition for a smaller aquarium. In my 29 gallon tank she is always hanging out on my live rock and eats aggressively even amongst the bigger fish. Very easy to take care of!
Chantale L Pinole , CA
Very cute, colorful addition! He fits right in. He's a friendly little guy! Great tank mate for any reef!
Megan J Knoxville , TN
My absolute favorite fish in the tank. These little guys take a while to get used to your tank, sometimes hiding out for as long as a week before appearing regularly. However, once they get over their shyness, what adorable little critters they are! They have so much personality, and want to be friends with all of your other fish. They love to perch on your mushrooms and polyps, and when they aren't perching, they are hovering in the middle of the water column. I would HIGHLY recommend these little guys!
Emily P. Corona , CA
In my 12 gallon Nano Cube, I have a Yellow Clown Goby. It adds so much color to the aquarium. It's electric yellow is beautiful! It loves to perch in brain corals, and tries to eat brine shrimp that can't fit in it's mouth! A very hardy little fish! I recommend this comical, peaceful species to anyone with a small reef aquarium.
Deanna
Good fish for marine tank. Very colorful. I ordered one and so far it is healthy and active. Easy to keep. A word of advice, only get one as they are aggressive to each other. This fish is a beautiful fish for a marine tank and adds color. It is peaceful with most other community marine fish. Will work in a reef tank too. I have one with my Clownfish, Royal Gramma, Blue Damselfish, and clean up-crew. Will be shy at first but will overcome fear and be a show-stopper.
Phil San Diego , CA
Yes it's small and very cute... but if you have SPS in your reef tank, DO NOT get this as it will go after the SPS polyps! I learned this first hand today and had to get him out.
Esther H Harvey , LA
Just received this goby. Love him. Not shy at all and will swim around almost as soon as he was released. Lovely bright orangy color add a splash of color to the tank.
Ashley M Cucamonga , CA
Great fish tons of personality BUT.... BUT will nip all your sps. IME these little guys cant help themselves from nipping at the base or new growth of SPS corals. I never noticed it before in my larger tank but in my 30gal Nano they cant help themselves.
1-10 of 10 testimonials