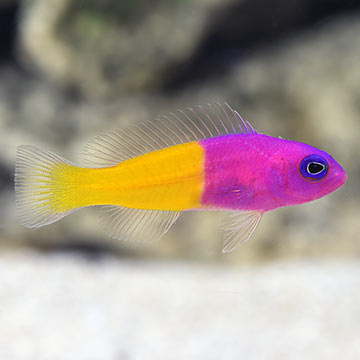 A 30 gallon or larger aquarium should be provided. The Bicolor Dottyback will not be intimidated by other fish and will defend its territory against fish two to three times its size. It will also eat ornamental shrimp and is a predator of nuisance bristleworms.

The diet should consist of meaty foods including brine shrimp and prepared frozen foods.

Write a Testimonial | Ask Customer Service
S. O. Clinton , UT
This is my husband's favorite fish in my tank. I have to say that he is lots of fun to have, because he loves to look out and see what is going on outside of the tank. When I first added him to my tank he was kind of shy, but that is no longer so. One thing I have to keep an eye on is him picking on the other fish. He sometimes feels that he is the biggest fish in the tank even though he is one of my smallest additions. That aside I would definitely recommend this fish to anyone.
Oliver W Morgantown , WV
This fish has color and character. It also seems to be quite curious about human onlookers. Although it likes to hide out in caves or crevices a lot of the time, it will readily come out and stare down anyone who approaches the tank. It has a very captivating, human-like stare.
Cheyenne S Esquibe Casper , WY
I have a bicolor pseudochromis in my reef aquarium, although it is aggressive over its territory and will nip other fish it loves our yellow watchman goby. The two of them are buddies.
Xander S Kremmling , OH
Beautiful little fish, and it is reef safe. However, it is not safe for shrimp or other small, or timid fish. It has killed 2 shrimp.
Tim B Silver City , NM
This guy is great I was initially skeptical about the whole online fish deal,however I'm happy now. Fish came super healthy and very fast. He was initially shy and hid for the first two days I didn't think he was going to make it. Now he's all over the tank goes in and out my live rock and is a super happy fish.
Jon L Manhasset , NY
I got this fish about a week ago. It is a little jerk! It is in a 54 gallon tank with 2 clowns, 2 chromis, and 1 damsel. It chases the other fish all the time(though has not hurt them) and is greedy with food. I must admit that it is very colorful and nice looking though.
Esther Hebert Harvey , LA
Nice colorful fish. LSU colors -my husband is a big LSU fan. It is delightful, bold and appears to get along with its own kind (as I have more than 1 of this).
1-7 of 7 testimonials