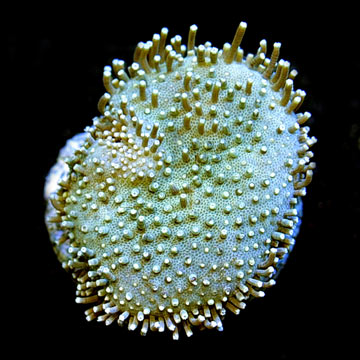 The Sarcophyton Toadstool Leather Coral is referred to as Sarcophyton Coral, Mushroom, Leather, or Trough Corals. They are found in various shades of brown, with white or gold polyps. It is difficult to identify many species because they all have the similar appearance of a mushroom or toadstool, each with a distinct stalk and capitulum (cap). As they grow older, they develop a folded appearance.

The Sarcophyton Toadstool Leather Corals are relatively peaceful, but adequate space should be provided between them and other corals in the reef aquarium. Some can produce toxins which are harmful to other reef inhabitants. The more plain Sarcophyton Leather Corals from Idonesia are easy to maintain in the reef aquarium and make an excellent coral for the beginning through expert reef aquarist. Sarcophyton Toadstool Leather Corals require medium to high lighting combined with medium to strong water movement. For continued good health, they will also require the addition of iodine, strontium, and other trace elements to the water.

The Sarcophyton Toadstool Leather Coral are attached to a small piece of rock that can be affixed to live rock anywhere in the aquarium with gel super glue or epoxy.