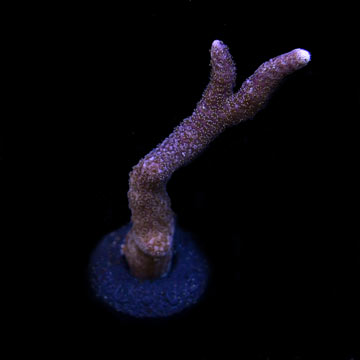 The Purple Montipora digitata coral is a very fast growing species that is aquacultured within the USA. It is a branching species that develops many branches whose form will vary with its environmental conditions. When the polyps are extended, the coral has a very fuzzy appearance.

This Purple Montipora digitata Coral is peaceful and can be placed in close proximity to other similar peaceful corals in the reef aquarium. Aquacultured Montipora is one of the easier to maintain SPS corals and grows rapidly in the established reef aquarium. It will require medium lighting combined with a medium water movement within the aquarium. For continued good health, it will also require the addition of calcium, strontium, and other trace elements to the water.

The Purple Montipora digitata Coral frags are mounted on a composite plug that can be affixed to live rock anywhere in the aquarium with gel super glue or epoxy.