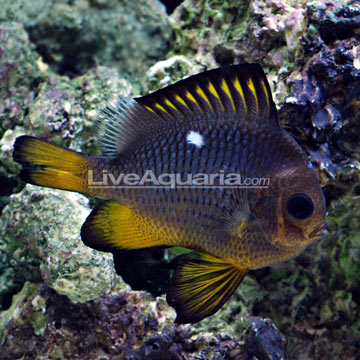 A 30 gallon aquarium or larger with plenty of live rock and décor is ideal. Because it can tolerate substandard water parameters, it is a popular fish among beginning hobbyists. A small group of juvenile Golden Domino Damselfish will add color and drama to most marine aquariums. Maintain this species with other semi-aggressive or aggressive fish, as they will become territorial as they mature.

The Golden Domino Damselfish feeds on a variety of meaty foods, herbivore preparations, and flaked foods.

Write a Testimonial | Ask Customer Service
Kristy J. Reston , VA
This is a gorgeous fish, with a very feisty personality. I love his spunk; he clearly thinks he is much larger than he is! But, we had to move him to our 72g aggressive tank with a Marine Betta, Picasso Trigger, and Flame Hawkfish, as he was relentless with more docile fish in our smaller tank. So in this case, Aggressive means Aggressive! We have also owned a regular Domino but he was no comparision to this "all-attitude" fish. Even prettier than the picture; the fish we received from LiveAquaria has beautiful yellow and black fins and tail. Well worth the trouble!
1-1 of 1 testimonials