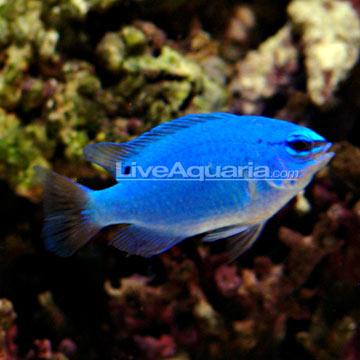 The Blue Damselfish is probably the best selling marine fish in the United States. Beginning hobbyists relish its hardiness and small size, while advanced aquarists praise the color and activity this member of the Pomacentridae family brings to the aquarium. Female Blue Damselfish are completely blue. Males, on the other hand, have an orange tail and are commonly called the Orangetail Blue Damselfish or Blue Devil Damselfish.

Native to reefs across the Indo-Pacific, Chrysiptera cyanea is usually busy defending a small territory. Interestingly, the Blue Damselfish has the ability to hide in a hole or crevice and darken to an almost black color. This usually happens when it is threatened. After the perceived threat is gone, the Blue Damselfish will return to its electric blue color in a matter of seconds.

The diet of the Blue Damselfish should consist of flaked and frozen foods, and herbivore preparations.

Write a Testimonial | Ask Customer Service
Clay J Cypress , CA
I have a female and she is very aggressive. So far she is responsible for killing two other tank mates. What they say is true – very aggressive – don't add other smaller fish after this fish has set up its territories. Other than that it is a hardy and beautiful fish.
Samantha C Oconomowoc , WI
I have had my Blue Damsel forever. She's a real trooper – she even survived my move and re-starting the tank! She is somewhat aggressive with the other fish, but seems to get along better now that she's used to them.
Josh R Laurel , MD
This is a very beautiful fish. Its ability to turn black is very cool to show to friends.
Brett [No City Selected] , CT
I have two of these, 1 male and 1 female (I think). The female is very passive and the male usually only chases other fish, although I have seen him nip at a yellow tale damsel once or twice. Mine are not that aggressive but they do have lots of room (55g with 7 small fish). These are great little active fish, I'd get them again! The picture is spot on, except the yellow is not that distinct on mine, as the fins become translucient at the edges. One time a bunch of pellets collected in a pile on the bottom and he defended them from 6 other fish for an hour till he decided it was time to eat.
John B Plymouth , MN
I don't want to be saying that the fish is bad or anything but, if you are getting one, DO NOT get it first!!! It is one of the most aggresive fish I've ever owned. It is responsible for four fatalities in my aquarium. Again, I don't want to be a downer and say that you shouldn't get one, but if anything I recommend the yellowtail.
Nolan P Buffalo , NY
Very good fish I got them when they were young and they grew to the size of my tomato clownfish but its weird because they dig holes in my gravel to escape from decorations.
1-6 of 6 testimonials