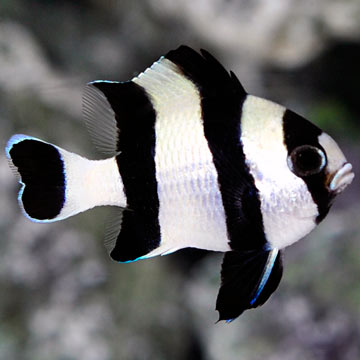 The 4-Stripe Damselfish, also known as Blacktail Dascyllus, Blacktail Damselfish, or Blacktail Humbug, is a popular fish. Three alternating black and white vertical bands make up the body coloration with a fourth black band ending at the tail.

A 30 gallon or larger aquarium with plenty of hiding places is suitable. Due to its aggressive behavior as an adult, it will do well in a community tank with other aggressive fish. It will not harm invertebrates or disturb the tank setting.

It will need a diet variety of meaty items, herbivore preparations, and flaked foods.

Write a Testimonial | Ask Customer Service
Ben Roberts Kings Moutain , NC
I believe that this fish should be added last because it is very territorial and can become a hassle to newly added fish including smaller triggers, blennies, and other types of damsels.
Luis Rodriguez Laguna Vista , TX
This fish was my first cycling fish and it has lived for 3+ years and is about 4-5 inches long! Great attraction. It is also friendly towards my convict tang.
Josh Roberts Laurel , MD
Great fish to have in your tank. Not only is he great to look at, he is also great to cycle your tank.
Audi Bowman Little Orleans , MD


If you are starting a new saltwater tank, I definitely recommend starting with the 4-Stripe Damselfish. They are very easy to care for and practice with. Not only are they beautiful, but they are also very fun to watch.