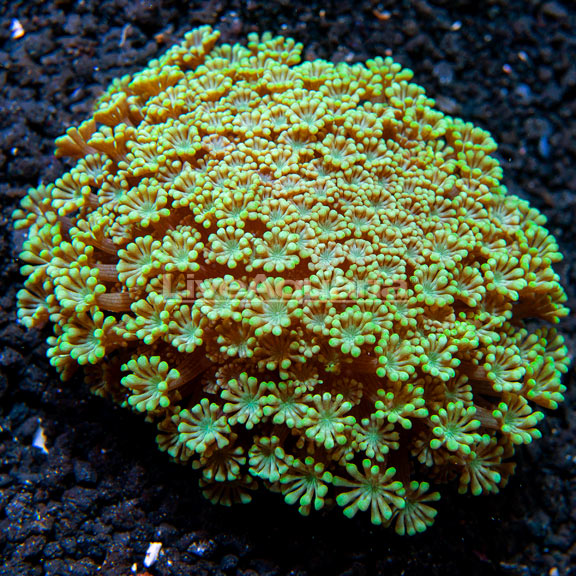 The Alveopora Coral is a large polyp stony (LPS) coral also referred to as the Alveopora Daisy, Flowerpot, Sunflower, or Ball Coral. The flower references are due to its appearance when all of its polyps are open. It then takes on the visage of a bouquet of flowers. It has 12 tentacles on each polyp and is often green; when displayed under actinic lighting, it will glow.

It is not an overly aggressive coral, but space should still be provided between itself and other corals. Its polyps can extend far past its base into the reef aquarium, where it can sting other species of corals. Clownfish are in direct association with the Alveopora Coral and will often play in its polyps if no anemone can be found in the reef aquarium. Being easier to care for than Goniopora, any of the Alveopora species make a good alternate for the novice reef aquarist, who is seeking a coral similar to the hard to maintain Goniopora. The Alveopora Coral requires low to moderate lighting combined with low water movement. For continued good health, it will also require the addition of calcium, strontium, and other trace elements to the water.

The diet of this coral should consist of micro-plankton or brine shrimp.