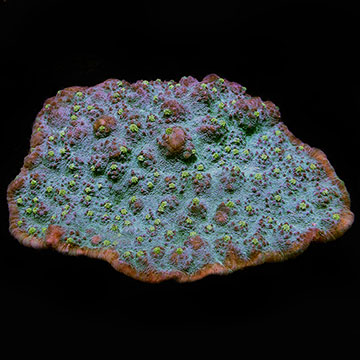 The Green Chalice Coral exhibits varying shades of green. The heavily-tissued, fleshy body of this Chalice Coral adds amazing texture and depth that animates the bold coloration to dramatic effect. This gorgeous color morph is sure to be a welcomed addition for the avid Chalice Coral collector or any reef aquarium hobbyists wanting a flush of exotic.

Care of the Chalice Coral is fairly straightforward as long as you maintain pristine water conditions. Chalice Corals prefer horizontal placement in areas of low to medium light and water movement. Keep in mind that the Chalice Coral can readily adapt to different amounts of lighting. Typically a slow growing coral, the species is known to exhibit both an encrusting habit when placed near aquarium glass as well as a plating habit when housed in open areas.