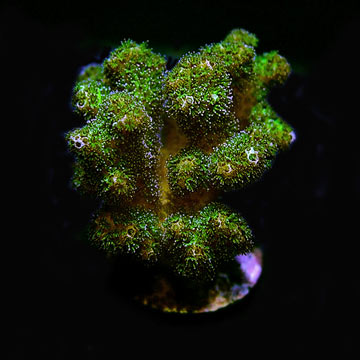 The Green Pocillopora Damicornis Coral grows in a form resembling a cauliflower, and is often referred to as Cauliflower Coral, Brush Coral, or Cluster Coral. These corals are some of the most sought after with longer hairy polyps that are green in color and differ from the coloration of the coral which is primarily yellow.

This Aquacultured Green Pocillopora Damicornis Coral is peaceful and can be placed in close proximity to other similar peaceful corals in the reef aquarium. Aquacultured Pocillopora is one of the easier to maintain SPS corals and grows rapidly in the established reef aquarium. It will require medium lighting combined with a medium water movement within the aquarium. For continued good health, it will also require the addition of calcium, strontium, and other trace elements to the water.

The Green Pocillopora Damicornis Coral will thrive in a variety of lighting conditions, ranging from power compacts, VHO, and T-5’s up to the more intense metal halides. Alter its position in the aquarium depending on the lighting, and provide at least 3 watts per gallon using one of the lighting systems mentioned above.

Green Pocillopora Damicornis Coral frags are mounted on a composite plug that can be affixed to live rock anywhere in the aquarium with gel super glue or epoxy.

Write a Testimonial | Ask Customer Service
Ian G Belmont , CA
Color is exactly the same in the picture, but mine is brighter. Has good growth and has larger polyps than most SPS corals so can eat foods like shrimp eggs in addition to oyster ovarian tissue. Actually looks like a cauliflower when it starts to mature.
1-1 of 1 testimonials