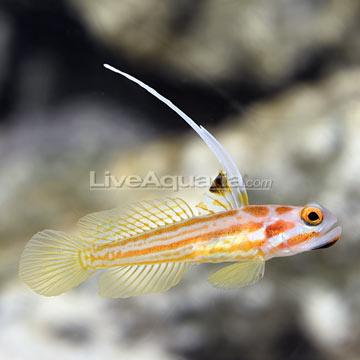 The Yasha White Ray Shrimp Goby, also known as the Yasha Haze Goby or Clown Shrimp Goby is a very unique goby that is not often available in the hobby. A vivid red and white broken striped body with a large dorsal fin and black patch under the jaw sets this fish apart from other gobies. Bright yellow opaque dorsal, anal, and caudal fins make this fish very appealing to most hobbyists. It has the ability to form symbiotic partnerships with most species of pistol shrimp. It provides a watchful eye while the shrimp digs a burrow for them to share.

Write a Testimonial | Ask Customer Service
Peter N Aurora , IL
Very shy. Comes out readily when fed after a few days.
Richard C Yonkers , NY
A great fish! Striking colors, very curious and hardy as well. Personality comes out more when paired with a Pistol Shrimp.
Elizabeth T Washington , MD
Very very beautiful fish. Mine has made a little den under some live rock. Less apt to move around when not paired with shrimp. Feeds very well on good frozen (reef frenzy) food. Over time becoming less shy. A striking fish. Non-aggressive.
Paul Porter Castle Pines , CO
A great little fish. Loves to hide in a burrow made by a pistol shrimp. If you have one, you may not see it often as it does like to hide.
1-4 of 4 testimonials