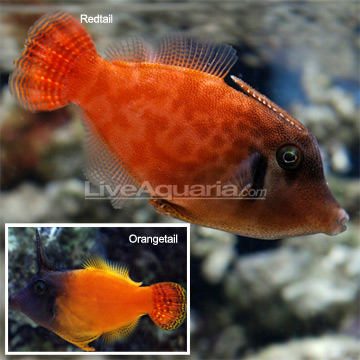 The Colored Filefish is also known as the Blackheaded Filefish. The body is orange to red in color and the head can be gray to black. Filefish from Hawaii tend to have more vivid colors than those from the Indian Ocean.

It is a shy fish, and rarely aggressive towards other fish except for those of its own genus. It is best suited for aquariums 30 gallons or larger that do not contain invertebrates.

The Colored Filefish may be difficult to feed initially; it may be beneficial to imbed shrimp into coral, and allow the fish to feed off of the coral. The diet should include shaved shrimp, squid, scallop, mysis shrimp, freeze-dried krill soaked in a vitamin supplement, and frozen marine algae. The Colored Filefish should be fed no fewer than three times a day.


My Red tail Filefish is, well, like a teenager - no fear, no manners. He eats everything that fits in his mouth and likes to pester the other tank mates. I think he actually enjoys seeing my Porcupine Puffer "puff up." He will soon be moved to his own tank - with lots of little crabs he can annoy. I love my FileFish; he has lots of personality.
Matthew A Jackson , MS
He's shy and loves brine shrimp and is cute. He's best friends with my porcupine puffer so I would recommend this fish to everyone who has an aggressive tank.
1-2 of 2 testimonials