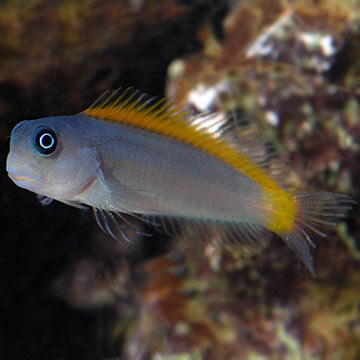 The Blue and Gold Blenny originate from the Indo-Pacific, and is a peaceful blenny for a community or reef aquarium. There are two color forms of Ecsenius lividanalis. One form has a blue head, yellow body and a yellow iris. The form that we are offering is referred to as the Dusky form. They are pale blue in color with a yellow dorsal fin and tail. Their iris is pale blue to white in coloration. Both variants share a common black anal spot. They are a comical addition to the marine aquarium that spends much of its time out in the open hopping and perching from one location to another.

The Blue and Gold Blenny is a perfect candidate for the reef aquarium and is considered reef safe but may nip at the polyps or bases of Acropora sp. and other SPS corals. If the SPS dominated aquarium is not heavily stocked with mature colonies these fish may damage Acropora sp. and Montipora sp. in these displays.

Generally found amid crevices and rocks on the bottom of its environment, the Black and Yellow Blenny needs a tank of at least 30 gallons with plenty of scattered live rock for perching and hiding. They are generally peaceful, but may become territorial towards others within the same genus.

The diet of the Blue and Gold Blenny should include meaty items such as vitamin enriched brine and mysis shrimp, chopped fish and shrimp, and a quality flake or pellet food.

My wife and I have one Blenny in our 300 gal. He is very fun to watch. An active fish and most of the time he is front and center perched on a rock. If you have kids, they will get a kick out of this fish.
1-1 of 1 testimonials