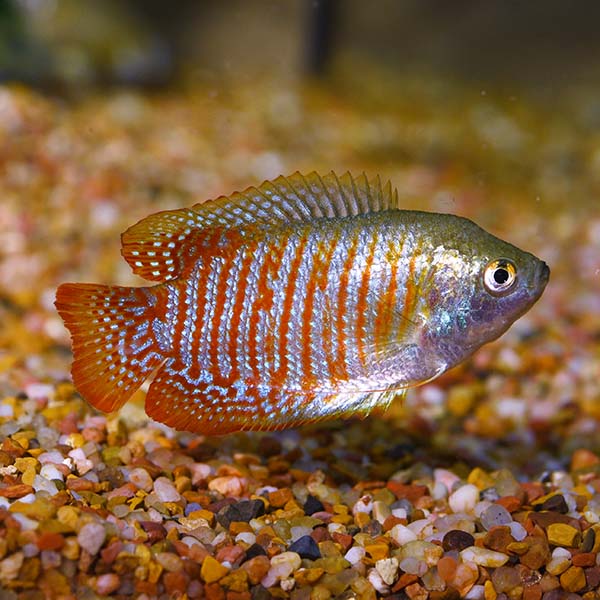 Dwarf Gouramis require a tank that is 10 gallons or larger. The aquarium should be heavily planted and have at least part of the surface covered with floating plants. A darker substrate will help show-off the gourami's colors, and peat filtration is recommended. Regular water changes are a must, as this gourami can be susceptible to disease. They should not be kept with large, aggressive fish, but are compatible with other small, peaceful fish as well as fellow gouramis. Loud noises often scare them, so the tank should be in a quiet area.

The Dwarf Gourami is a bubblenest builder that uses plants to help bind together the bubbles. Besides the difference in color, the sex can be determined by the dorsal fin. The male's dorsal fin is pointed, while the female's is rounded. The water level should be reduced to 8 inches during spawning, and the temperature should be approximately 82°F. After spawning the female should be moved to a different tank. The male will tend to the eggs and fry, and when the fry are 2-3 days old the male should also be removed. When first hatched, the fry should be fed infusoria, and later, brine shrimp and finely ground flakes. Freeze-dried tablets may also be fed to older fry.

The Dwarf Gourami is an omnivore and prefers both algae-based foods as well as meaty foods. An algae-based flake food, along with freeze-dried bloodworms, tubifex, and brine shrimp will provide these fish with the proper nutrition.

Write a Testimonial | Ask Customer Service
Kelly M Dryden
I have one of these beautiful fish in my tank along with the spotted Gourami. It is a shy fish, but very nice to watch, and contrasting colors make this fish beautiful. I would recommend this fish for anyone!
Mike R Miami , FL
I especially like this species of Gourami, as they do not require that large of a tank. Their colors are shown off in a planted aquarium as well.
Nathan O O'Fallon , MO
I love them. Though when I feed them, they jump and spit but are very funny and we never had one jump out. I rate 9 out of 10!
Ross J Houston , TX
I've had two male Dwarf Gourami's now for about a month. For some reason, I have a bully, and he picks on the other Gourami. Just showing who's boss and protecting his territory. At first it was bad, constant chasing and nipping the other Gourami's fins, but he has calmed a little. He never hurts the other fish...so I'm glad or he'd be finding a new home. I have 10 Neon Tetra's, 4 Albino Cory Cats, 2 Dwarf Gouramis, 2 Glass Catfish and 2 Golden Twinbar Platys. An active happy community tank and the Gourami's add to the spectacle.
Nathan O O'Fallon , MO
I really love these fish! These fish are perfect for any tank. I can't think of any catch with them but that they CAN be mean to other males. These fish are livebeares and need room to get to the top. These fish are amazing and I HIGHLY recommend these fish for any one.
Gerome M Sacramento , CA
I have two of these Gouramis in my tank. I REALLY like having them along with a Swordtail, Rasbora, and a Red-tail Shark. I highly recommend getting one.
Jared C Shreveport , LA
These fish are so nice to have and watch especially when you have a mated pair.And such lovely colors ,a sure thing for a freshwater tank.
Jamie T Woodstock , VT
I just introduced two of these fish into my 26 gallon, bow-front, planted aquarium yesterday. Today they seem to be getting along with the six Danios I bought, but are still a little shy. I don't know if this is bad but when I feed them, they wait for big flakes to float down, And when they suck in the flake, they spit out a cloud of tiny flakes. But they seem to be doing alright. These are playful fish and I would recomend them to anyone who wants to add colorful life to their planted aquarium.
1-8 of 8 testimonials