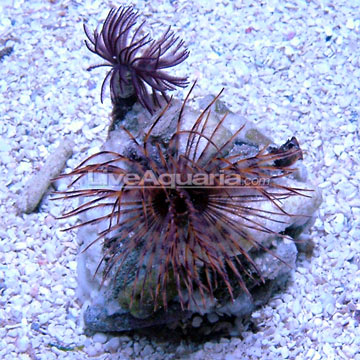 The Hawaiian Feather Duster is a fascinating addition to the reef aquarium. Considered both a feeding device and a breathing gill, the stunning crown (radiole) unfurls in all directions and sways gracefully as if keeping time with the current. The fan-shaped crown of the Hawaiian, or Giant Feather Duster is tan or orange with brown band colorations. The radiole of some species from certain locales may be up to 7 inches in diameter, or of brighter colors.

Supplemental feeding of phytoplankton and liquid organic foods should be provided.

Write a Testimonial | Ask Customer Service
Kyle Chicago , IL
Great, really simple to keep specimin. I have had them for over 1 year and haven't lost a single one, they periodically eject themselves from the tube and reappear a month or 2 later. So if yours disappears don't worry about it, it's probably still alive.
Jason Frederick Tucson , AZ
This Hawaiian Feather Duster is so great. It opened up immediately after I placed it into the tank. It seemed to make itself right at home, and now is huge and spread out.
1-2 of 2 testimonials