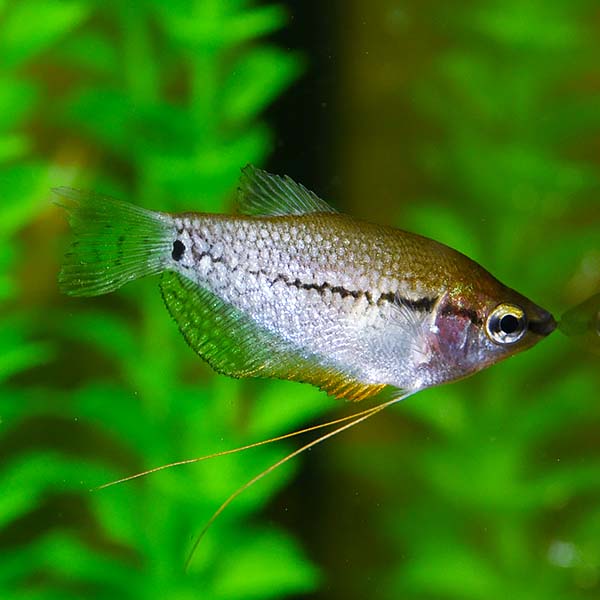 The Pearl Gourami is a peaceful fish that is also known as the Leeri or Lace Gourami. It is one of the most attractive, hardiest, and easy-to-keep gouramis. The body is stretched out and laterally compressed with ventral fins that are long and thin, having the look of feelers. It is covered with iridescent pearl and brown flecks that give it a mother of pearl appearance. There is a horizontal black line that runs from the lips to the tail, where it ends with a spot. The Pearl Gourami is a Labyrinth Fish. Fish in this group breathe directly from the air and must have access to the surface of the tank.

The Pearl Gourami requires a 30 gallon or larger tank with water approximately 12 inches deep, and a covering of floating ferns that may be used as hiding places. The substrate should be dark and the light subdued. The ideal tank mates for the Pearl Gourami would be similar in size and temperament. They should not be housed with aggressive tank mates, like Cichlids. They will hide in a corner, begin to loose color and may refuse to eat if kept with overly aggressive fish.

It is easy to tell the male from the female because he has extended, pointed dorsal and anal fins, and is more red. Prior to breeding, the pair should be fed live or frozen brine shrimp and worms for conditioning. The water temperature should also be raised to 80°F. When breeding, the water level in the tank should be reduced to 4-5 inches. The male will build a bubblenest under which spawning will take place. After spawning the female should be moved to a separate tank. The male Pearl Gourami tends to the eggs, and once the fry are hatched, the male should also be removed.

The fry should be fed liquid food or infusoria culture several times a day. At approximately two weeks, freshly hatched (or frozen) brine shrimp may be offered to the fry. When the fry reach approximately one month, fine flake foods may be offered. Water should be changed every two to three days, and as the fry grow larger, they should be distributed between several tanks to reduce lethal build up of wastes.

The Pearl Gourami is an omnivore and prefers both-algae based foods as well as meaty foods. An algae-based flake food, along with freeze-dried bloodworms, tubifex, and brine shrimp will provide these fish with the proper nutrition.

Write a Testimonial | Ask Customer Service
Laura - - , IL
This is one of the most beautiful fish I have owned! Very peaceful. Plant coverage is a must or they will hide and their color will not be as spectacular as it could be! He was the prominent fish in a collections of gouramis and there was no tail nipping.
Megan A. Branford , CT
I have two male pearl gouramis and they are great! They never fight with each other or other species. They are very pretty, and soon I'm planning on getting them some girlfriends. I'm hoping they'll breed!
Dillon H Irvine , CA
This fish is very peaceful. It's a good choice for beginners. Its color is very elegant.
Andres Z Bethesda , MD
The pearl gourami is a really great fish. I have one in my thirty gallon with live plants, driftwood and some schooling fish like cardinal tetras and brilliant rasboras. Overall a great addition to your aquarium. Some pros are that it has a really nice coloration and is non-aggressive. The bright red underbelly and the checkerboard pattern is mesmerizing. The only two cons I have were that the fish is pretty shy the first few days after being introduced but does settle in after 4 or so days. Even so, it is not a very fast swimmer and likes to hide a little bit. I also think that it is nipping at some of my thinner plants. The pros really do outweigh the cons though, as it is a really spectacular fish and if you are on the fence about keeping it, you should definitely buy it.
Bill Garthe Peru , IL
Got my Pearls today early in the morning and they arrived nice and healthy. They are a nice size, but not full grown which I wanted. The phone service is great at LiveAquauria and I could not be happier. Highly recommend.
1-5 of 5 testimonials