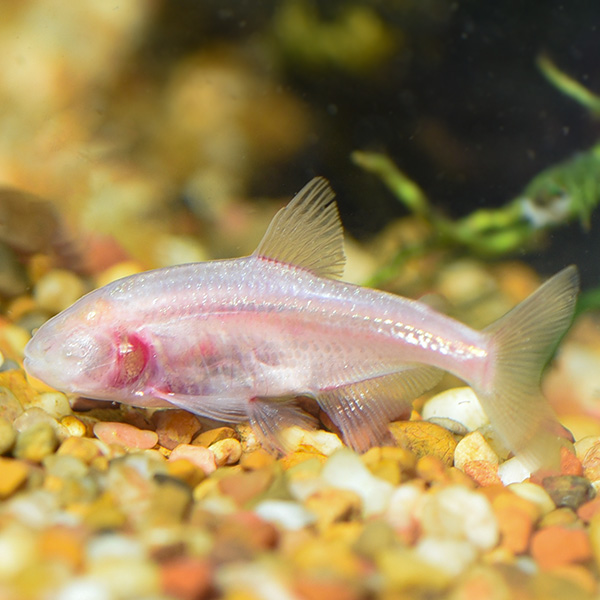 The Blind Cave Tetra, Astyanax mexicanus , is one of the most unique freshwater fish available to the aquarium trade. In nature they live in caves along the lower Rio Grande and Pecos Rivers in the United States, and south through eastern and central Mexico. The Blind Cave Tetra is born with eyes, but, since they are not needed, are reabsorbed into their bodies after birth. Due to their absence of sight, they have well developed hearing and use their lateral line to detect water pressure changes, allowing them to navigate and locate food. They also maintain a memory map of their surroundings.

A true cave inhabitant, they present themselves in a pink color due to their lack of pigmentation, with their scales getting an iridescent quality to them as they mature.

A moderately sized aquarium freshwater fish, they grow to a length of 4 ¾”. A peaceful and easy fish, it is a fish well suited to beginning hobbyists. Tankmates should be chosen with care. Because they are blind, they may bump into others while feeding, so very shy or sluggish tankmates may interpret that action as aggression.

An aquarium size of 20 gallons is sufficient for a small group of four or five, as they like to be with others of their own species, as do other schooling fish. Blind Cave Tetras will make themselves at home in any environment but for those wishing to replicate their natural environment, a dark substrate of sand or small gravel and low lighting as well as slate or rocks along the back and sides of an aquarium will help them feel at home. Décor and plants are not necessary elements to include. Water temperatures in the range of 64°-82°F and pH balance in the range of 6.0-8.0 is recommended.

Of the Characiformes order and Characidae family, they are omnivores that will root in the substrate for food and will enjoy sinking pellets, frozen foods, live foods, flakes, and granules.

A prolific breeding species, females are egg layers and are easier to identify as they are rounder than males are. To keep eggs safe from predation, a breeding pair can be moved to a separate tank that has a substrate to protect the eggs (such as marbles or smaller rocks) that the eggs fall under. A sponge filter is recommended for this spawning tank to protect the fry as some filters draw fry into them. Females can lay as many as 1,000 eggs that will hatch within 24 hours and the fry will be swimming within a week.