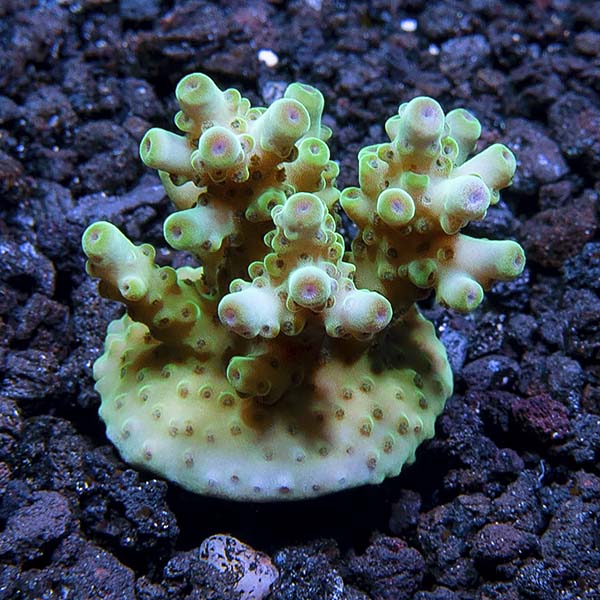 The ORA® Skyline Granulosa Coral is a beautiful new release from Oceans, Reefs & Aquariums (ORA®). In reef aquariums where the lighting is predominantly blue in appearance, this coral will display many fluorescent shades of light green accented with iridescent purple and blue colored corallites, making it an attractive addition to SPS reef aquariums. In whiter lighting scenarios this beautiful Acropora will display a creamy lavender color and the corallites will appear plum in color.

To maximize the growth rate of your ORA® Skyline Granulosa Coral, it is imperative to maintain a high pH, alkalinity, and calcium levels and to keep phosphate and nitrate levels as close to zero as possible. If conditions are ideal, it can also be cultured and grown into a new colony from living fragments or broken pieces.

In addition to high lighting conditions and near pristine water quality, the ORA® Skyline Granulosa Coral benefits from strong, intermittent water flow within the aquarium. This is best accomplished with a wavemaker and multiple powerheads. For continued good health, the ORA® Skyline Granulosa Coral requires the addition of calcium, strontium, iodine, magnesium supplements, as well as trace elements.

The symbiotic algae zooxanthellae hosted within the ORA® Skyline Granulosa Coral supplies the coral a majority of its nutrition. However, it will benefit from the addition of various types of phyto and zooplankton.