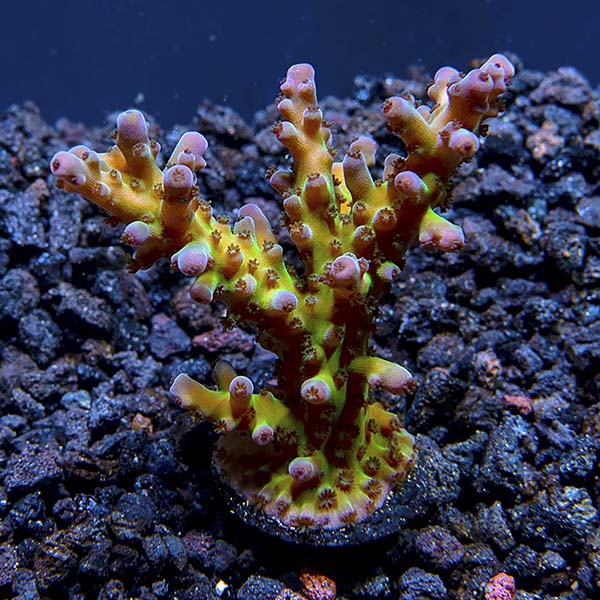 The Carl Acropora Coral is one of the latest must-have "Acros" from Oceans, Reefs & Aquariums (ORA®). While its shape and structure is typical of most Acropora species, its stunning color is anything but typical. This coral conjures up colors and visions of a surreal sunset flaming out on a late fall evening with purple corallites to give you a sense of the ensuing dusk.

To maximize the growth rate of your ORA® Carl Acropora Coral, it is imperative to maintain a high pH, alkalinity, and calcium levels and to keep phosphate and nitrate levels as close to zero as possible. If conditions are ideal, it can also be cultured and grown into a new colony from living fragments or broken pieces.

In addition to high lighting conditions and near pristine water quality, the ORA® Carl Acropora Coral benefits from strong, intermittent water flow within the aquarium. This is best accomplished with a wavemaker and multiple powerheads. For continued good health, the ORA® Carl Acropora Coral requires the addition of calcium, strontium, iodine, magnesium supplements, as well as trace elements.

The symbiotic algae zooxanthellae hosted within the ORA® Carl Acropora Coral supplies the coral a majority of its nutrition. However, it will benefit from the addition of various types of phyto and zooplankton.