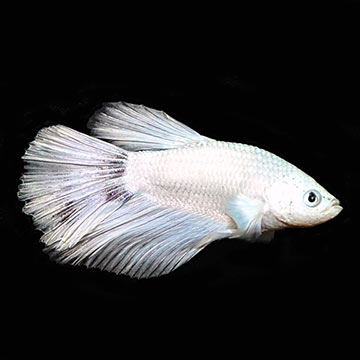 The White Halfmoon Betta offers a contrast that is very striking when placed in an aquarium with dark decorations or background. The beautiful white coloration of this Betta is further embellished in the Half Moon fin configuration and suggests you may be envisioning an aquatic angel.

In addition to its angelic appearance, this variety of Betta splendens has been selectively bred for its distinct Half Moon tail. A Halfmoon Betta demonstrates highly ornate fins with the caudal (tail) fin forming a semicircle or "Half Moon" shape. The caudal spread of a Halfmoon Betta is 180 degrees.

The White Half Moon Betta shares the same care requirements as other Betta splendens varieties. As such, only one male Betta should be kept in an aquarium. However, the smaller, shorter-finned females may be housed together with caution. If kept in a community aquarium, the White Half Moon Betta should be housed with peaceful fish that will not nip at the Betta's glorious, flowing fins.

The ideal environment for the White Half Moon Betta is a well-filtered and heated aquarium that maintains a stable temperature between 75° and 86°F. For best care, Betta splendens should be kept singularly in aquariums of at least 4 gallons in size or with suitable, peaceful tank mates. The White Half Moon Betta also prefers a variety of hiding places amongst the foliage of freshwater plants. Therefore, having a well aquascaped and appropriately-sized aquarium with a filter and heater is essential for the proper care of these otherwise hardy and colorful freshwater aquarium fish.

For breeding purposes, male and female White Half Moon Bettas can be temporarily housed together. Once the female lays the eggs, the eggs are placed inside a bubble nest and tended by the male Betta. Fry appear in about 24 hours and must be fed very small food initially, such as crushed or powdered flakes and newly hatched brine shrimp. Fry will also accept finely chopped hard-boiled egg yolk.

The White Half Moon Betta is a carnivore and its diet should consist of a quality flake food, pelleted Betta diet, frozen or freeze-dried Bloodworms and Brine Shrimp.