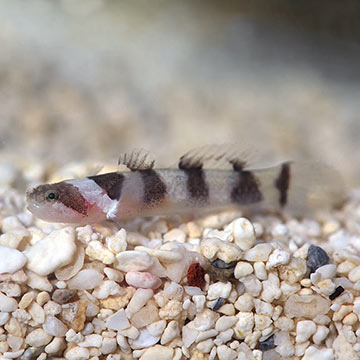 The ORA® Captive-Bred Jaguar Goby is an exquisite specimen sure to excite goby enthusiasts and connoisseurs of the unusual. Despite its diminutive size and relative anonymity in the aquarium hobby, the Jaguar Goby leaves a big impression. Though beauty is said to be in the eye of the beholder, it is easy to see why the Jaguar Goby is a visually appealing fish. Its' intriguing shape and bold, eye-catching color pattern commands attention. Dark graphic stripes contrast boldly against a parchment yellow body color to give the Jaguar Goby a primal appeal. Due to its size, the ORA® Captive-Bred Jaguar Goby is best displayed in smaller marine aquariums where its uncommon beauty can be appreciated in detail.

The ideal setup for the ORA® Captive-Bred Jaguar Goby is an established aquarium of at least 10 gallons with plenty of reef rock and a sand bed. Consider an aquarium landscape that simulates reef rubble zones with varied topography. Provide open sand and rubble flats of varied coarseness or arrange a network of small and mid-size reef rocks to create a honeycomb of tunnels. Similar to other gobies, the ORA® Captive-Bred Jaguar Goby may demonstrate aggressive territorial behavior towards conspecifics if kept together, or if the tank is too small.

The ORA® Captive-Bred Jaguar Goby should be fed a varied diet of live and frozen brine shrimp, mysis shrimp, live black worms and prepared foods for carnivores. It needs to be fed at least two times per day.