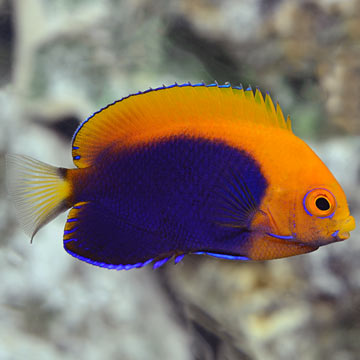 The Flameback Angelfish requires a minimum of a 55 gallon tank with lots of hiding places and live rock for grazing. On occasion, this fish may nip at SPS and some species of polyp corals in the reef aquarium.

The diet of the Flameback Angelfish should include Spirulina, marine algae, high-quality angelfish preparations, mysis or frozen shrimp, and other meaty foods.

Write a Testimonial | Ask Customer Service
Jim L Draper , UT
The African Flameback Angelfish is a little timid but happy fish. I had one for many years. It is ok in a reef tank; it never hurt any of the corrals. It seems to have expressions on its face when it moves its eyes. It is one of my favorite marine fish. Mine enjoyed flake food and live brine shrimp. Some may fight with other pygmy or smaller Angelfish.
Travis E New York , NY
One of the hardier pygmy angels, settles well into tank life but should be the last fish added as they can be a little aggressive at times. It may nip at various star polyps, etc.
Eirc P Kempner , TX
Very territorial in 92G even after adding last to the aquarium. Take care when housing with peaceful tankmates as it will defend his territory which includes any and all of your live rock structure. Chased Chromis away and claimed there hiding space for his own. Never bothered the Black Sailfin Blenny however and interestingly seemed to form almost a life partnership with the Radiant Wrasse. They are inseparable swimming around together picking at the live rock.
Tracey Kirk Liberty Township , OH
Very pretty fish. Always out and about. Not overly aggressive but will stand his ground. I've had one for two years and he has never touched a coral in my mixed reef tank.
Charles D Columbia , SC
BEAUTIFUL FISH, probably my favorite dwarf angel, moving in and out of the rock work constantly, has not bothered any corals, and very peaceful. The color around the eye is mesmerizing.
1-5 of 5 testimonials