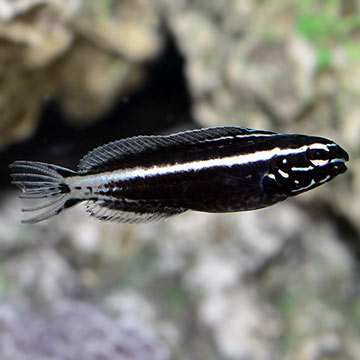 Blenny lovers rejoice! The ORA® Captive-Bred Kamohara Blenny offers an easily available and domestically aquacultured source for this much sought-after specimen, once only available in Japan. Featuring an arresting jet black body coloration set off by a horizontal, metallic white line that follows the upper contours of its body, the ORA® Captive-Bred Kamohara Blenny is truly a delight lending sophisticated beauty and energetic activity to any community reef aquarium.

Originally found in the shallow waters off the subtropical, southern coasts of Japan, the ORA® Captive-Bred Kamohara Blenny are robust fish capable of tolerating a wide range of temperatures, making it an excellent addition for mixed reef systems or cool water marine aquariums.

The ORA® Captive-Bred Kamohara Blenny requires a 30-gallon or larger aquarium with ample rockwork to thrive. The live rock provides places to hunt and feed on small crustaceans as well as places to hide. It is not usually aggressive unless the tank mates appear to have a similar shape as it does. Its fangs are more of a defense mechanism used for biting back an aggressive fish.