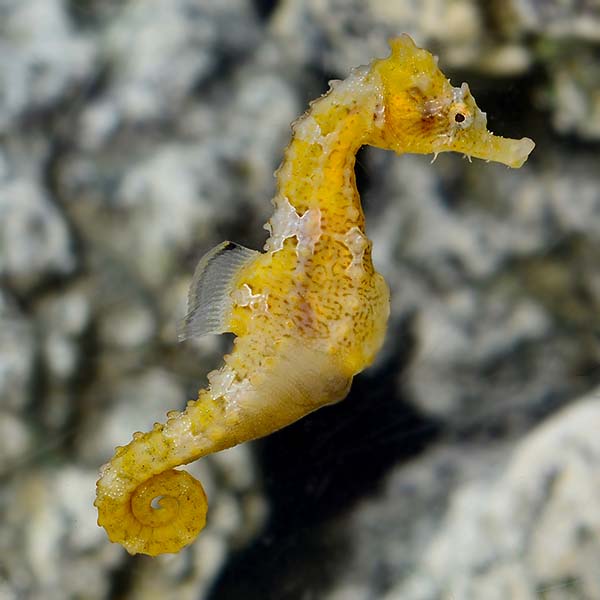 The ORA® Captive-Bred Lined Seahorse is one of the hardiest seahorse species making it a great choice for the dedicated enthusiast. The Lined Seahorse is a US native species that ranges from Nova Scotia, Canada and the northern Gulf of Mexico all the way down to Panama and Venezuela. It will grow to a maximum length of 7-1/2".

These social fish thrive when kept as a mated pair or in small groups in a species-only aquarium. A 30 gallon aquarium is sufficient for a single pair. Add 10 gallons to the size of the aquarium for each additional pair. Spray bars may be used to create gentle flow while eliminating stagnant areas in the aquarium. Seahorses are not strong swimmers, preferring to use their prehensile tails to hitch to branching live rock, algae, or artificial decorations.

They may be kept with small, shy fish such as small gobies, pipefish, dragonets, and firefish. However, aggressive, territorial, or fast-moving fish do not make good companions.

Seahorses can be harmed by anemones and corals with stinging tentacles or corals that are large enough to consume them, such as brain corals. While sea fans, Acropora corals, and other branching corals may be safe for seahorses, they can be irritated or damaged by a seahorse that continually hitches to them. Crabs and clams may pinch a seahorse causing a wound that could lead to secondary infections. Small ornamental crustaceans may be consumed by the seahorses.

Write a Testimonial | Ask Customer Service
R J Phoenix , AZ
I ordered a pair of these and got some beautiful horses. The female was stout and striped. The male was striped as well and has a head full of beautiful cirri. Outstanding!
Erica Vaughn Baker City , OR
These seahorses are so cute! Both were yellow when I got them, but one loved hanging onto a green rock and shortly turned a lime color to match the rock. But now she's back to yellow. The other seahorse loves an artificial yellow coral and has remained yellow. They also love to hang on the feathers dusters which are sticking out of the sand. The feather dusters don't seem to mind because they stay open even if the seahorses are hanging on them. I trained the seahorses to eat from a turkey baster which greatly cuts down on the waste in the tank. Each seahorse can easily go through 10 more them mysis shrimp per meal. These are very hardy seahorses and very easy to care for if you're willing to dedicate the tank to their needs. I highly recommend ORA Seahorses to anyone looking for hardy and healthy captive-bred seahorses!
1-2 of 2 testimonials