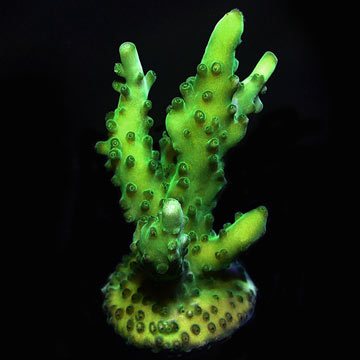 The Aquacultured ORA® Green Velvet Acropora from ORA is a stocky, short-branched coral with a deep metallic green color. Mature colonies grow to have a thick, stout body and irregular, odd branches. The corallites tend to be long and tubular and the polyps remain retracted during the daylight hours giving this coral a smooth appearance. The intense green coloration of the ORA Green Velvet often looks iridescent under sunlight spectrums. It's not a very fast growing coral, but extremely hardy and tolerant of various lighting and flow conditions.

They will thrive in a variety of lighting conditions, ranging from power compacts, T-5s, powerful LEDs and up to the more intense metal halides. The ORA aquacultured corals satisfy the majority of their nutritional requirements by means of photosynthetic, symbiotic zooxanthellae algae hosted within its body. To maximize their growth rate, it is imperative to maintain a high pH, alkalinity and calcium levels, and to keep phosphate and nitrate levels as close to zero as possible. If conditions are ideal, these corals can also be cultured and grown into a new colony from living fragments or broken pieces.

Along with lighting and water quality, Acropora corals prefer strong, intermittent water flow within the aquarium. This is best accomplished with a wavemaker and multiple powerheads. Acropora corals receive a majority of their nutritional requirements from photosynthesis, but will benefit from the addition of foods designed for corals and invertebrates.

The ORA Aquacultured Green Velvet coral is attached to a plastic plug and can be easily placed in holes or between the rockwork of the reef aquarium.