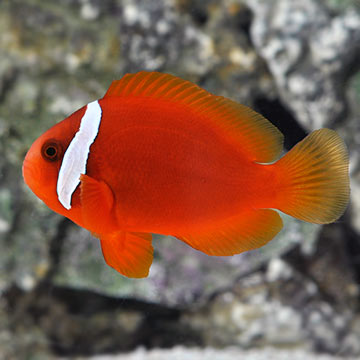 The ORA® Captive-Bred Tomato Clownfish, also known as the Bridled Clownfish or Red Clownfish, is found throughout the Pacific, almost always in association with an anemone such as Bubbletip Sea Anemone (Entacmaea quadricolor). The Tomato Clownfish has a wider distribution than the Fire Clown, which is usually restricted to the Indo-Pacific reefs. It has also been known to use coral as a host in the absence of an anemone. Captive-Bred Tomato clowns are usually darker in coloration to their wild counterparts, but as the fish matures, it will lighten to a nice red/orange coloration. Juveniles have multiple white bands, and black pectoral fins, that gradually disappear as the fish matures. It can attain a length of 5 inches, but it usually reaches a maximum of 3.5 inches in an aquarium.

An aggressive eater, the Tomato Clownfish will consume most meaty foods and herbivore preparations.