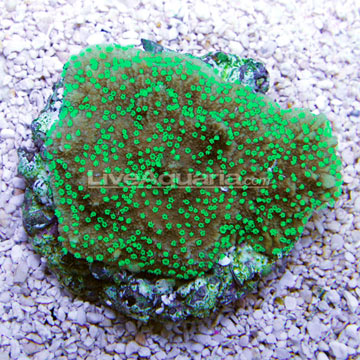 The aquacultured Supernatural Capricornis is one of ORA®'s most exceptional Cap varieties. The base is dark green in color and punctuated with neon green polyps. The Supernatural cap grows much thicker than ORA's other plating Montipora varieties. Capricornis corals grow in a circular, leaf-like shape, and are sometimes referred to as a vase coral. They are very beautiful and fragile corals, and care needs to be taken on its placement in order to protect it from damage.

This Aquacultured Montipora capricornis Coral is peaceful and can be placed in close proximity to other similar peaceful corals in the reef aquarium. Aquacultured Montiporas are one of the easier to maintain SPS corals and grow rapidly in the established reef aquarium. It will require medium lighting combined with a medium water movement within the aquarium. For continued good health, it will also require the addition of calcium, strontium, and other trace elements to the water.

The ORA Aquacultured Supernatural Capricornis coral is attached to a argonite plug and can be easily placed in holes or between the rockwork of the reef aquarium.