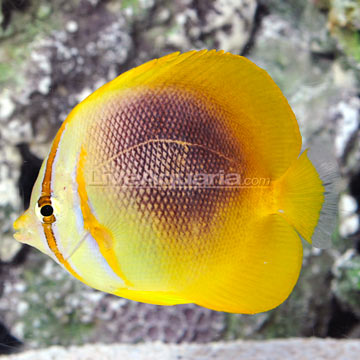 The Sunburst Butterflyfish is also known as the Gold-Banded Butterflyfish thanks to the graphic golden-orange bands over its eyes and operculum. Like a sunflower in bloom, the darker, steely blue coloration of the body is surrounded by a perimeter of golden yellow coloration. This cheerfully colored specimen is sure to be a coveted star for the experience Fish Only With Live Rock (FOWLR) aquarium keeper.

Often regarded as an obligatory corallivore (live coral eater), the Sunburst Butterflyfish is a carnivore that can be difficult to feed, especially in the beginning. To entice eating, offer live vitamin-enriched brine shrimp, clam, and mashed squid or shrimp. Once eating regularly, offer mysis shrimp and frozen carnivore preparations. The Sunburst Butterflyfish should be fed at least three times a day.