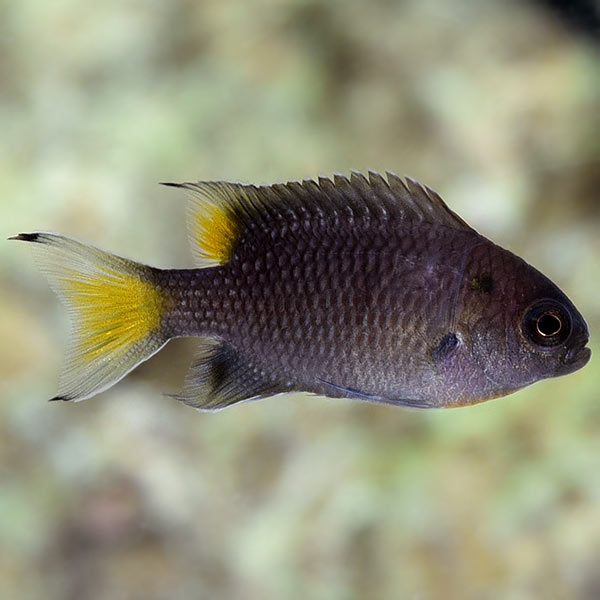 Add a regal and hardy Damselfish to your reef aquarium with the Regal Demoiselle. This stately dark beauty is blackish grey with a lyre tail that frames an elegant burst of yellow. It is commonly kept long term in small schools, if provided ample swimming space and room to roam. It is a relatively passive fish that adds a dramatic effect to the reef or fish only aquarium.

Native to reefs ranging from mid-depth to shallow lagoons of the Indo-Pacific and South Pacific, wild specimens prefer to school in large shoals amongst branching corals like Acropora. In the home aquarium, the Regal Demoiselle does best in similar environments and will actively swim at all levels of the aquarium water column. Small schools of the Regal Demoiselle add a unifying and understated pop of beauty to almost any well-established reef system.

These fish are generally not picky eaters. In the aquarium, they will usually feed on flakes and pellets but should also be given fresh or frozen algaes and meaty foods like brine shrimp, mysis shrimp, planktons, krill, shrimp, scallop and similar items.