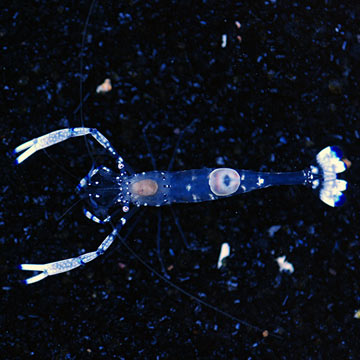 The Venus Anemone Shrimp, or Glass Shrimp, is a commensal shrimp commonly found living on sea anemones, and hard corals such as Heliofungia sp. and Euphyllia sp. Their near transparency allows Venus Anemone Shrimp to virtually disappear within their surroundings, making them a hidden treasure to find in reef aquariums. They are well-suited for smaller nano-style reef aquariums.

In their natural habitat, Venus Anemone Shrimp also avoid predators by forming symbiotic relationships with stinging anemones, acclimating within their host's tendrils by chemically camouflaging themselves.

Like other invertebrates, the Venus Anemone Shrimp is intolerant of copper-based medications, high nitrate levels, and fluctuating water parameters. It also requires the drip-acclimation process when first introduced to your system. Also, proper iodine supplementation is necessary to promote molting and growth. To supplement their diet, feed freeze-dried, frozen, and flake foods.

Write a Testimonial | Ask Customer Service
Ralph Schweigert Pleasant Hill , CA
A pair of these were my first anemone shrimp in a small nano tank. Very entertaining as they sway back-n-forth as well as wave their claws furiously in a criss-cross fashion as they try to get your attention. Quite inquisitive and rather transparent, so need to be careful when using a gravel vacuum tool or siphon hose to avoid sucking one up. Mine seem to prefer frozen over flakes/pellets, but will still sample the later. Perfectly at home in my Ricordia garden (which substitute for anemones). Great for a smaller, peaceful tank.
1-1 of 1 testimonials