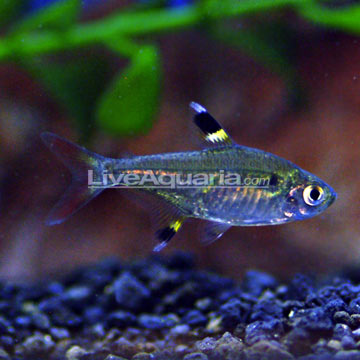 The natural diet of the X-Ray Pristella Tetra consists primarily of small insects and planktonic animals. However, it will accept frozen or freeze-dried brine shrimp, daphnia, bloodworms tubifex, as well as micro pellet food and high quality flake foods.

Write a Testimonial | Ask Customer Service
Victoria K Los Angeles , CA
This is a great fish. I have 2 in my 10 gallon aquarium right now and they stick like glue! They swim around sometimes,but mostly just chill in their favorite spot in the aquarium. They are kept with a hatchetfish, and a chinese algae eater with live plants. They are a fun and unique fish to keep, would recommend giving them a buddy if you purchase one because they are somewhat of a schooling fish.
James Smith Warner Robins , GA
Purchased 12 of these guys during the lockdown to replace stock that had died off due to old age. All fish arrived alive, healthy, and are doing very well now a month later. Would recommend ordering from Liveaquaria for anything you need!
Jen D Bucyrus , OH
4 of these cute fish are with a candy cane tetra,5 blue neon t.,3 black neon t.,2 ember t., and 3 corys. The x-rays are chasing each other but leave the others alone and the candy cane t. gets in on the fun also, such a great tank!! Its one of my favs of my 5 tanks!! highly recommend liveaquaria also, all were shipped with superior care!
1-3 of 3 testimonials