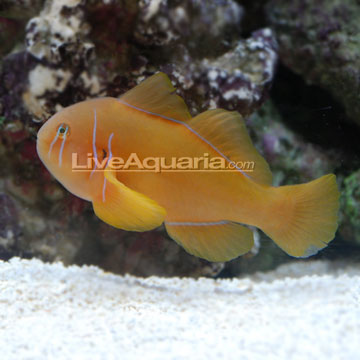 The Citrinis Clown Goby, also known as the Citron or Citrin Goby, is common within the reefs of Sri Lanka and the Coral Sea. They are usually found among soft and hard coral colonies. They are a small yellow fish with blue vertical lines around the eyes and gills, and a blue horizontal line along the dorsal fin. Their body color can vary between dark brown and pale yellow. They are a peaceful fish that makes a wonderful addition to a reef aquarium containing colonies of polyp coral and other soft corals, as they enjoy swimming and hiding amongst the polyps.

It requires a 10 gallon or larger aquarium and prefers branched corals, often resting on them for hours at a time. It will rarely become aggressive towards other fish, but will fight with its own kind in smaller tanks. It is best if it is kept with other docile species.

It is common for clown gobies to spawn in an aquarium. Caution should be exercised if the aquarium contains Acropora sp. or similar SPS corals. They will lay their eggs on the underside of the coral's branch, which will cause tissue recession in that area of the coral.

Write a Testimonial | Ask Customer Service
Candy V. Washburn , WI
My citrine goby was a little slower than the yellow clown gobies to adapt to life in a large reef tank, but now stays in the open. Sometimes he will attack the smaller yellow clown gobies during feedings.
Sophia Graniela Phoenicia , NY
WOW - what a gorgeous, adorable little fish! I got my citrinis clown goby today from Liveaquaria.com and it was top notch. Looks just like the picture! I will probably be putting another fish with him in my 12g NC but I love him and he is a must have for any aquarium. Thank you Live Aquaria!
Charles Pope Rainsville , AL
Cool fish. Great specimen. Loves to perch on rock. A great peaceful tank-mate.
Jack Beardmore Philadelphia , NY
My Citrinis Goby came in perfect condition. Very nice specimen. Thanks LiveAquaria!
1-4 of 4 testimonials